This area was occupied by native Americans for millennia. It was explored by Daniel Boone and others after the Revolutionary War, and land was granted to Revolutioary War pensioners. The Nashville Trace ran on the north side of the Knob.

Named by early pioneers traversing through the region, this designated Indian trail led these settlers into this area during Western migration. This mainly Cherokee trail, (although used some by the Shawnee), originated at Rockwood in Roane County, Tennessee. It meandered northward into Jackson County where it forked. One prong went through Smith, Trousdale, and Sumner Counties to its’ destination at Nashville. The other section continued through Jackson County and the Indian villages there to emerge at two sites in Macon County. The lower leg entered at the county’s extreme southeastern corner and the upper leg entered above Jennings Creek. The two joined south of Red Boiling Springs and thence traveled west of there to Monroe County, Kentucky where the trail crossed the Macon County line in the proximity of White Oak, Long and Salt Lick Creeks. The trace reached its’ end at the Indian settlements on the Green and Barren Rivers in Southern Kentucky. Daniel Boone followed the Cumberland Trace during his explorations thru here. 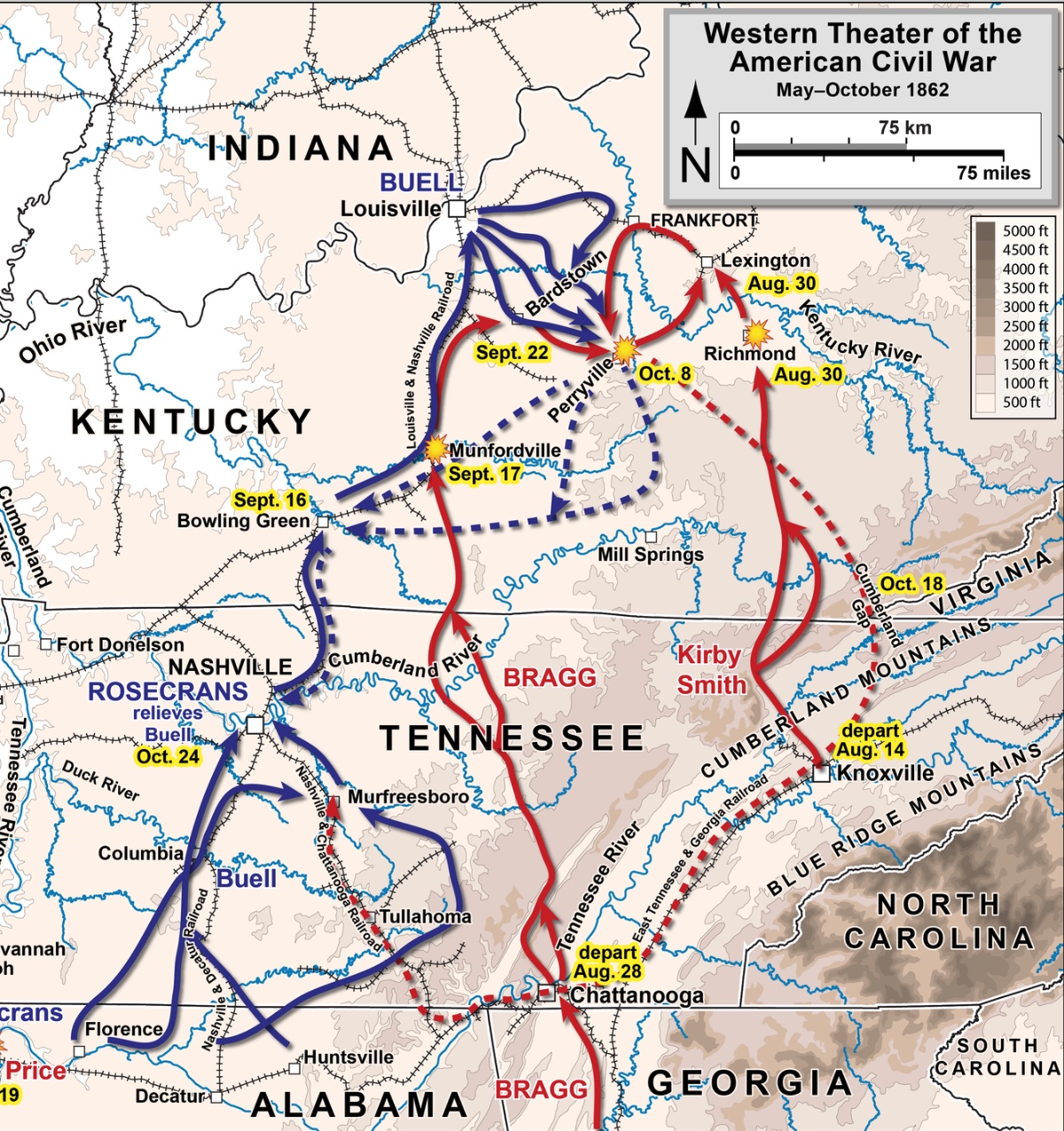 In 1862 the Union army under Gereral Buell encamped at Prewitts Knob before the battle of Munfordville and again after the battle.  After the Civil War, there was a Congressional investigation into the battle and the conduct of General Buell.  Here is the Wikipedia summary as of 2019:

Wilder’s force was first approached by Brig. Gen. James R. Chalmers who marched on Munfordville from Cave City, KY without orders. Chalmers had received an erroneous report from cavalry under Kirby Smith that the federal force in Munfordville had “not more than 1,800 men, entirely raw troops, and that they were fortifying their position, but that the railroad and telegraph had been destroyed in their rear, cutting them off completely from all communication and re-enforcements.” Upon arriving on September 14, Chalmers demanded a surrender, which was rejected, and then proceeded to launch frontal assaults that were repulsed by the federal defenders. Chalmers’ brigade suffered 288 casualties in the attacks before retreating back to Cave City.

Braxton Bragg was angry at Chalmers for his “unauthorized and injudicious” assault, but determined to force Munfordville’s surrender nonetheless. Bragg believed that leaving Munfordville intact would “throw a gloom upon the whole army…[but forcing its surrender would] turn defeat into victory.” Thus Bragg’s army made a forced march of 25–35 miles the night of September 15–16 to Munfordville.

Late on September 16, realizing that Buell’s forces were near and not wishing to kill or injure innocent civilians, the Confederates sent another demand for surrender. Wilder entered enemy lines under a flag of truce, and Confederate Maj. Gen. Simon B. Buckner escorted him to view the Confederate strength to convince him resistance was futile. Realizing the odds he faced (45 cannon and 25,000+ infantry), Wilder agreed to surrender. The formal ceremony took place the next day as the paroled federals marched out of Munfordville with new uniforms. W.L. Trask, a Confederate soldier, said the federals “were well clothed, looked fat and sleek and clean and neat and were in strange contrast to our own hungry, ragged and dirty looking rebels.”

Despite the capture of over 4,000 federals and stores of supplies at Munfordville, the victory did little for the Confederates other than slow them down. Author Kenneth W. Noe said “Unless he [Bragg] intended to fight it out along the Green River, an idea that flickered only briefly under duress, Munfordville was a three-day distraction the Confederate cause could ill afford.” The incident is a good example of how Bragg had little overall vision for the campaign and instead simply reacted from event to event.

On the 17th of January 1870, about 4 o’clock in the morning, the little town of Cave City, about 12 miles northwest of Glasgow, was wrecked. The great cyclone that swept the northern portion of the county was first noted at a point about 2 or 3 miles southwest of Glasgow Junction (Park City), in the neighborhood of Bird’s School House. The wind blew from the southwest, reaching the Louisville and Nashville Railroad 2 miles north of Glasgow Junction, at the old Hawkins place, and it ran a parallel course with the railroad and the road to Cave City, where it took a more eastern direction, and there were no serious casualties there. It’s path never exceeded a half mile in width, but there was destruction and wreckage of everything in that path, except an occasional object left standing in isolated loneliness.

Bird’s schoolhouse was unroofed, and many houses between there and the old Hawkins place were unroofed or blown down, a large quantity of various livestock being killed.  The old Adams place was destroyed except the house.  William Lewis Poynter’s place was a complete and total wreck.  His family escaped injury, but he lost nearly every piece of livestock on the place.  At Joel Y. Wilson’s house, both the doctor and his lady were badly hurt.  It was first thought her injuries were mortal, but later info assured her condition was more hopeful.

At this point, there seemed to have been an undulation in the in the current path, its force rising high enough to spare the dwellings in its path, for about a mile.  Then it dipped at Prewitt’s Knob, utterly and entirely destroying that little village except the old tavern house occupied by LA Downer.

At Prewitt’s Knob, John McCown and his eldest child, a little girl about 8 years old, were killed; his wife and another child were badly injured.  Miss Fite was also killed and her father severely hurt.  A large brick stable on Mr. Downer’s premises was blown down, killing several fine horses and mules, all except a fine mare which parted her halter and escaped.  The splendid orchards and nurseries of Messrs. Downer and Williams at the northern base of the Knob, upon which great care and considerable expense were bestowed, were broken and twisted to mere stumps and shreds.  From here to Cave City, a distance of 2 miles, every dwelling, barn, stable, and fence was either capsized, blown down, or blown away.

At Cave City, the entire southwest portion of town, about one-third of the whole village, and stretching off eastward for some distance presented a saddened wasteland, thickly strewn with fragments of lumber, trees, and brush from neighboring woods, with pieces of broken furniture, torn and tattered clothing, with papers, feathers, dead cattle, poultry, etc.  But the material destruction dims with thoughts of the loss of life and dreadful human suffering.  Husband and wife, parent and child, lay down with hearts full of life and affection, to awaken in another world, or on their swift journey with no time to say farewell.

At Cave City there were 5 deaths, and at the time, it was not known how many mortally injured.  The dead were George W. Poynter, his wife, and only child, about 2 or 3 years old; Andrew Davidson; and Mrs. Sterritt, wife of JW Sterritt.  These 5 added to the 3 already mentioned at Prewitt’s Knob and 2 Messrs. Vaughan near Glasgow Junction, made 10 in all.  Among the injured were Miss Mattie Drane, Miss Puss Nevill, JH Foster, JH Brown, D McKinney and his wife, and Dr. and Mrs. JY Wilson, John Edwards, WW Parrish, and James Foster, severely.  Prof. Williams, wife, and 2 children, AL Mallery and nephew Robert Jolly, wife, and child, WM Herman, wife, and 2 children, Miss Lively, 2 children of ET Ritter, Mr. Foster’s wife and 2 children, and Mrs. Peggy Rogers, slightly.

Medical assistance was promptly rendered by the excellent and efficient physicians of the town, Drs. Williams, Hatcher, and Garnett, assisted by physicians from Glasgow and Caverna, as soon as they could reach the place.  All were well and properly cared for.  The dead were interred on Tuesday.  Mrs. Sterritt was placed in the family vault of her father, Col. Robert Sterritt, near Munfordville.  Mr. Davidson was buried with becoming ceremonies by the fraternity of Odd Fellows.  Mr. Poynter and family were buried in the family cemetery in the vicinity of Cave City.  Mr. McCown and his child were placed in the family burying ground of his father-in-law, Mr. Edmond Davis in the western portion of the county.

No doubt the heaviest property losses fell on Mr. Downer, at the Knobs, and Mr. George Middleton of Cave City, the former in the destruction of his stable and horses, and orchards and nurseries; the latter in the loss of a large quantity of tobacco stored in 2 barns, and estimated by him to be worth 10,000 dollars.  Prof. Williams, Mr. Hermon, Andrew Davidson, George W. Poynter, Bud Nevil, and Mr. Foster, had their dwellings and every house on their premises, with all their furniture and apparel blown entirely away.  In some instances hardly enough left to mark the place where they stood.  The new Church, built a year before the storm, and used by all Christian denominations worshipping in the town was blown down and all that was left was a pile bearing no resemblance to a house, and little indication of ever having been one.  The fine schoolhouse and Masonic lodge which with the Church, constituted the leading objects of pride of the town’s population, was blown down and scattered for miles.

JB Grubbs of Eminence, KY, was engaged in a series of church meetings.  He was the guest of Prof. Williams at the time of the storm, and received some very severe injuries.  Besides the total destruction named, adding the part of town occupied by negroes, which was wiped entirely out, except a solitary cabin, damages and losses of less degree may be mentioned.  The dwelling of Dr. Williams stood alone and uninjured among the wreck of his outhouses.  Dr. Hatcher’s dwelling sustained partial damages, easily repaired.  That of Mr. Sam Preston was considerably strained and split.  A house belonging to Capt. Noah Smith had the ell lifted and borne around several yards of its place.  Many other houses were careened, unroofed, or lifted from their foundations.

On Tuesday following the disaster, citizens collected several hundred dollars, and placed it in one of the Glasgow banks, subject to order of Mr. Price Curd of Cave City, to be used by him and others for relief of the sufferers.