About the Owners of CRYSTAL ONYX Cave

Cleon Turner found the cave in 1960, Ray Gossett financed the development and for five years they created trails, stairs and bridges.  It opened for tours in 1965 and was owned or operated by Ray Gossett, Wesley Odle,  Ed Hay and Ed’s widow Karen. In 2009 it was sold to Cumberland Cellular, which has the towers atop of the Knob, and they closed the cave.

Scott and Sara Sendtko had toured CRYSTAL ONYX Cave many times and in 2010 they returned for another visit.  They were disappointed to see that it was closed.  Because of the nature of their business, they had been thinking of moving to Kentucky. They had the good fortune to track down the owners and buy the cave.

It took four years to sell their place in Michigan and get established in Cave City.  Then in 2014 they started working on rebuilding the cave. In 2015 they bought the campground and surrounding property.   Over the years Scott has replaced the stairs, bridges and railings, lowered and re-gravelled the trails and installed all new LED lighting. He has also opened up new areas of the cave. It reopened on May 25, 2018 after being closed for nine years.

They have a great love of the cave and Scott feels it is his calling to rehabilitate the cave and share its beauty with his guests. 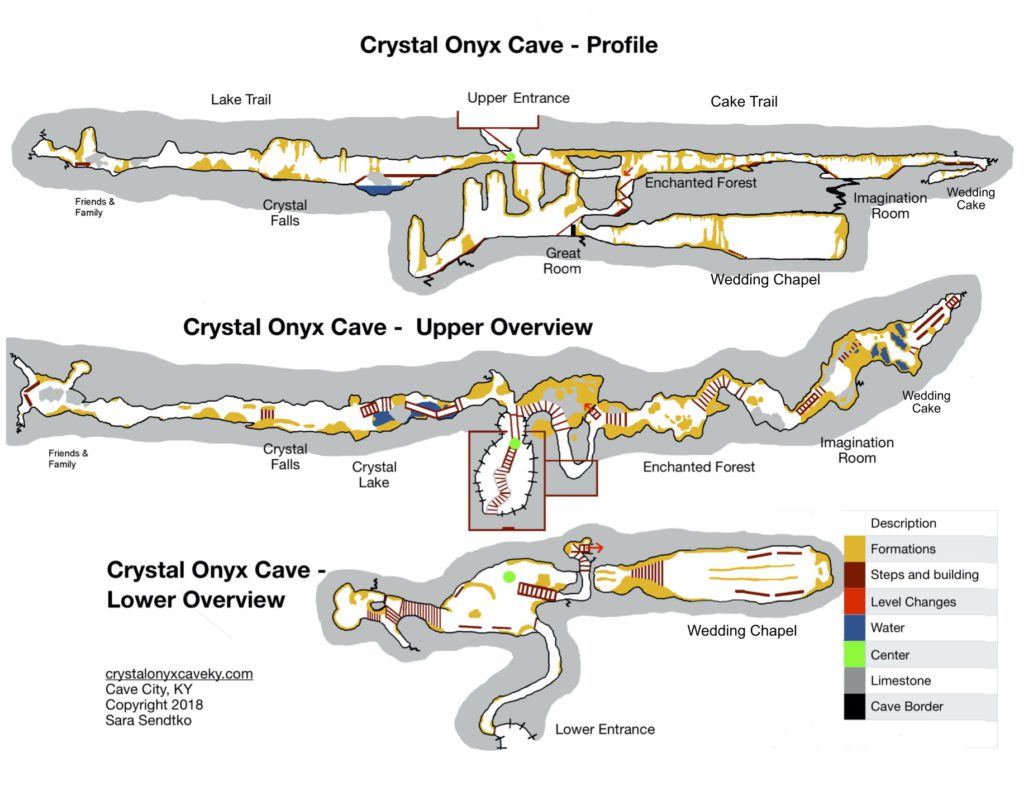 What went into the cave:

Scott lowered the trails so that there is more head clearance whenever possible.  He made concrete steps in some spots to replace steep trails.  54 tons of pea stone was carried into the cave by Scott, two 5 gallon buckets at a time, each weighing 50 lbs. That is 1,080 trips into the cave with gravel.  While in the cave, the buckets were filled with mud, dirt, rock and other debris and hauled back out. Hundreds of tons of rock, mud and dirt were hauled out by bucket and wheelbarrow.

Sara mixed 17 cubic yards of concrete weighing 68,850 lbs (34 tons). Scott carried half of the concrete into the cave two 3 gallon buckets at a time, each weighing 65 lbs. The other half came in by wheelbarrow through the lower tunnel.

He installed 2,000 feet of hand rail, replacing almost all that was in the cave. He also installed an additional 9,000 lbs. of steel I-beams, channel, angle, re-bar, grating etc, to rebuild stairs and bridges.

2,000 feet of electrical conduit and miles of electrical wire were installed. The cave had been electrified with 279 floodlights, 27,900 watts total and 418,500 lumens.  Scott has redone it with 207 LED bulbs using 1900 watts and putting out 155,250 lumens.  The wires are hidden, but the fixtures are visible, consequently, the cave is exceptionally well lit when compared to other caves.

Scott did much of the work himself, but many other people, including family and friends helped with the rebuilding of the cave.

To the right is a 360 picture of the Great Room at the bottom of the cave. 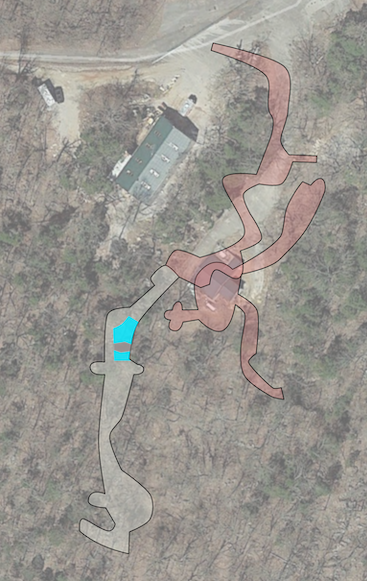 The image to the right matches the  surface to the approximate location of the cave below.  The road is at the top.  The cave building is in the center of the picture.  The northern outline  is the Scenic trail, the lighter colored one to the south is the Lake Trail and the center one is the bottom trail. The ends of the upper trails are not accessible to tours.  This depiction does not show the height of the rooms.  The upper trails follow the course of a river that was captured underground.  It includes about 100 steps inside the cave.  The lower tour includes the largest formation – Goliath, and the largest room – the Palace Room, and is about 140 stair steps.

Private, Exclusive Tours:  If you want a private tour of C. O. C. or have a special request or occasion, such as a photo shoot, announcement or proposal, we can accommodate you. Rates vary depending on the request.  Base price starts at $150 per hour, which allows 1 to 6 people plus $15 for each additional person regardless of age or status, up to a maximum of 20 people. Further restrictions may apply.