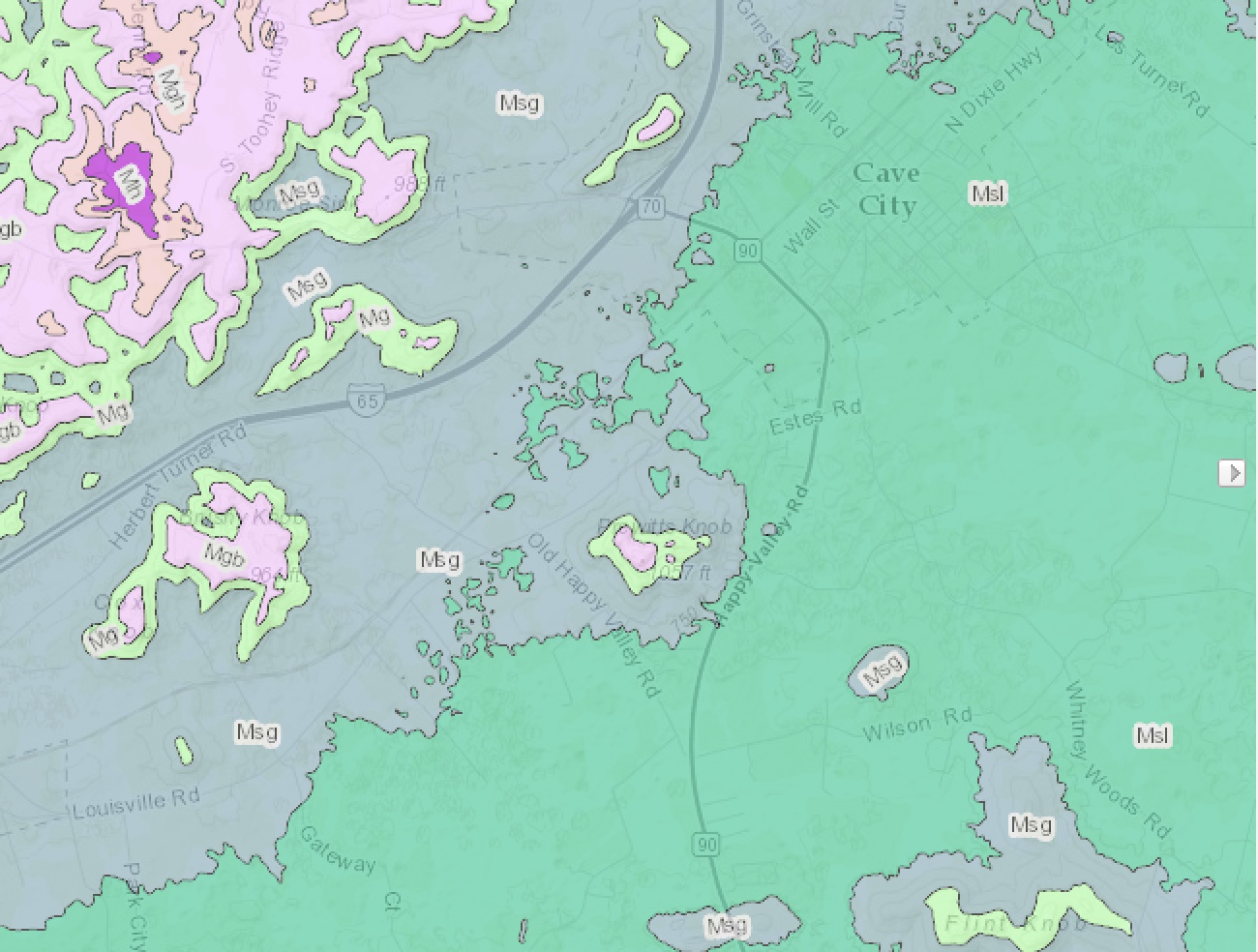 Prewitts Knob is the pink spot in the center of this map.  Cave City is to the north and Mammoth Cave to the west.  The map shows the Big Clifty limestone in pink, Girkin in light green, St. Genevive in gray-green and St, Louis in green.  It shows how the knob stands alone above the Pennyroyale Plateau.  Caves are the rule in limestone, rather than the exception.

Geologists theorize that the limestone was deposited in layers hundreds of feet thick from 350 to 320 million years ago.  It is made of animal shells, bones, coral, and calcite precipitates called “oolites”. We were a shallow sea near the equator, but continental drift caused us to move northward and rise above sea level.  The Big Clifty sandstone cap was deposited on top of the limestone. The cap protected CRYSTAL ONYX and others caves from being eroded away.

Water flowing through soil picks up carbon dioxide and forms carbonic acid. That is the carbonation that gives soda pop its fizz.  It very effectively dissolves calcite, including limestone, animal shells, teeth and bones. Water gets saturated with calcium and when it is exposed to air can’t hold as much so gives it up to make our beautiful secondary cave formations.  Stalactites start as “soda straws” where the drip leaves a small ring of calcite before it falls to its mate stalagmite below.  Once the straw is clogged, the water either flows down from the top or is pushed out of the formation.  That creates a rough surface known as “cave coral”. Flow stone is formed when water flows over surfaces in sheets.  Draperies are made when the water flows as drips down a knife edge, leaving a bit of calcite along the way. 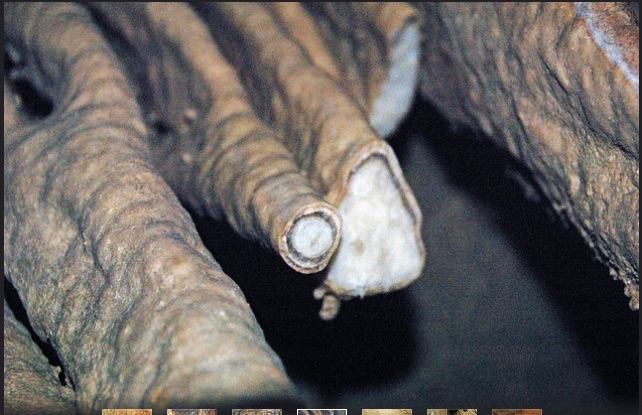 According to geologic theory, about 10 million years ago, there was a river flowing atop the Big Clifty sandstone.  It found a hole and entered the underlying limestone.  There it started dissolving the limestone, and relocated below the surface.  Our entry sink hole is one place the water entered, also areas located along the Lake Trail.

As we continued to be raised above sea level, the water table dropped, and the river dug lower into the limestone, ending near the lake level.  Erosion probably caused the river source to disappear. Water also carved the Palace Room. Subsequent deposits of flow stone closed up the water channels.

The sandstone was eroded away, and water could flow through the limestone. Once the cave was exposed to air, the water couldn’t hold as much calcium and it started to be deposited as our beautiful secondary formations.

Minerals of the cave

Calcium – Most of the cave is composed of calcium in various manifestations:  Limestone is dissolved by carbonic acid – the carbonation in soda pop. When exposed to air, the calcium is deposited as calcite (CaCO3) to make our spectacular formations.

Dolomite, also known as “dolostone” and “dolomite rock,” is a sedimentary rock composed primarily of the mineral dolomite, CaMg(CO3)2. Dolomite is found in sedimentary basins worldwide. It is thought to form by the postdepositional alteration of lime mud and limestone by magnesium-rich groundwater. It is harder and more impervious than limestone. When it dries it forms a characteristic honeycomb texture.

Quartz (SiO2) is the most abundant mineral found on the earth’s surface. We find it in dikes where the limestone cracked as it dried and then geothermaly heated silica rich water filled the cracks.  Also dissolved holes in the limestone were filled forming Kentucky geodes, flint nodules and quartz roses.

Cleon Turner thought that the quartz was deposited by a volcano that was in the cave.

Manganese as pyrolusite and psilomenale (MnO2)  is found in the cave as black deposits. Most manganese ores are from layers of manganese-rich sedimentary rocks that formed in ancient oceans. It was used by pigments in cave paintings.

In early descriptions of CRYSTAL ONYX cave the black deposits were mistaken for soot from primitive people’s torches, and contributed to the belief that the cave was  inhabited.

This an interactive 360 view of the Moon Room. You can see the “moon milk” on the ceiling, an old light fixture from the 60s, and where stalactites have been broken and are now regrowing soda straws.