Summary of Cleon Turner's memoir from 1968 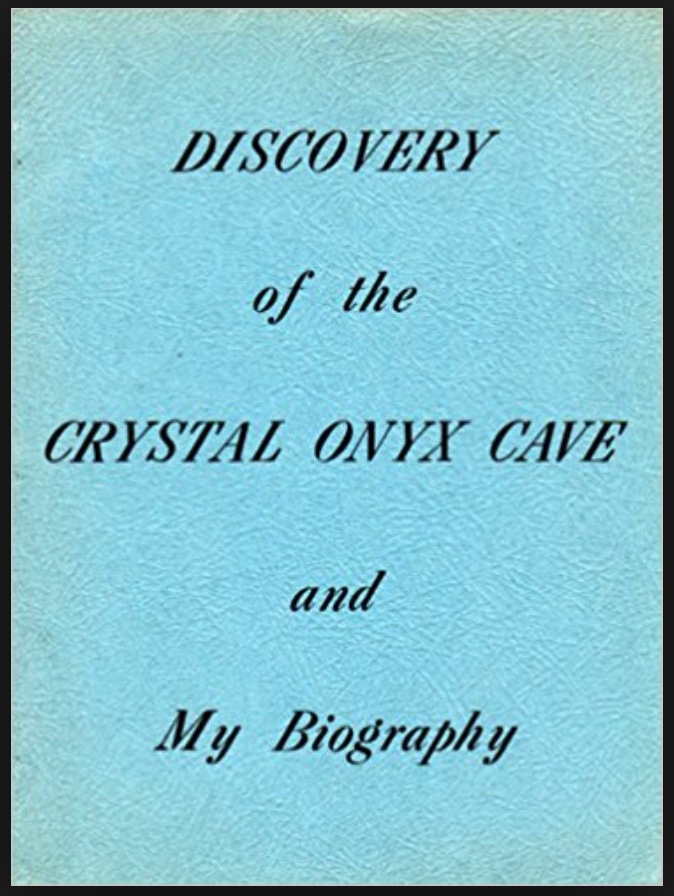 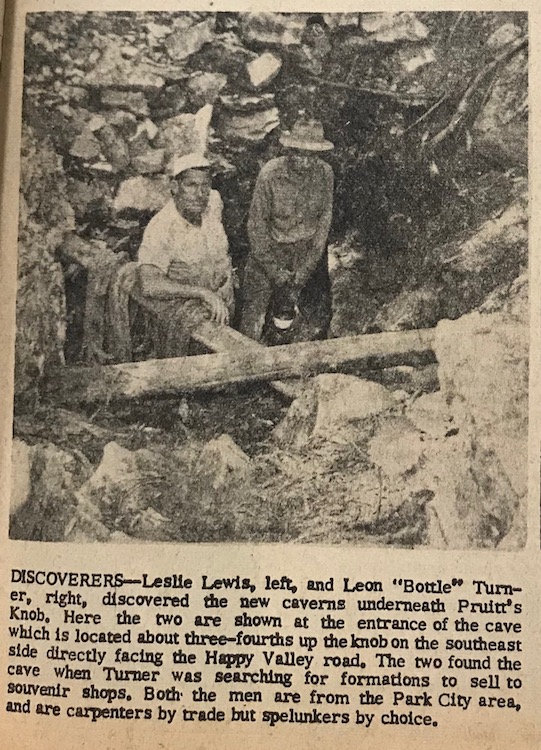 *This book appears to be a transcription of dictation or an interview made by Mr. Turner. He may have discussed discovering several caves, or just Crystal Onyx Cave. His locations are vague, and he doesn’t name any of the people who worked with him. My comments and summaries are in parentheses().*

“This is the way Crystal Onyx cave was discovered by Mr. Cleon Turner. It all started back in the early thirty’s after several cavemen gave up the search for the cave they thought to be up on the knob. Then some men from another place came with oil rigs and geiger counters. They had no luck either:  Even after spending one hundred thousand dollars. A short while after they quit a man came to me and asked me to look for a cave on that particular farm, so I did. He and I walked over part of the farm and it was the places all the others had worked. I couldn’t understand the places they worked as we walked around the large hill, using their very same paths.

(The next day Cleon got tools, walked back up the hill and started digging.  He opened the cave entrance about noon. Then he went back to the owner’s place and got ropes and went into the pit about 30 feet.  He explored the pit and found an opening to a large room with many formations.) “Then I located another entrance which was filled up with dirt and large stones, then I had to work my way out to the top of the cave.” (He climbed up his rope and met two men who were waiting for him at the entrance.)

“I told them I had found one of the most beautiful caves for its size I had ever seen in a long time. The man that owned the farm asked me if I thought it could be discovered and explored on out. I told him no. He then told me to be sure the next trip I made in and if I could get all of the stones out and sell then and give him one third of the money they brought. I made the entrance some larger as it would be easier to get in and out. I worked for several days getting the stones out with the help of some other men to carry them to the place where we stored them for sale. I sold several dollars worth of them and gave him his part of the money which was several dollars at the time.”

(Cleon also roamed over the knob looking for more caves and inspected some good prospects.  He discovered one that had skeletons:) “I found there had been two different tribes of Indians and had used this cave for their burial grounds. One was the flat headed Indian and the other I never learned the name of. I found a lot of bones and that was how I learned of the type of Indian there were. One bone was two and one half feet in length and about six inches in diameter which made the bone about eighteen around in all. The bones are now in a museum.”

(For another cave, Cleon made a trade with a farmer on a different hill. They searched for another entrance.  There were signs of a cave that Cleon looked for.) “He asked what was that and I told him it was a certain bar of rock I had been trying to find that is a sure sign of a cave and it seals the cave where the entrance would be.”  During the winter he was still searching the knob for a cave, using his knowledge of the geologic formations.  He found a pit in a likely spot and did some digging, but it was too cold and the land owner wouldn’t help him.  Later that year, he found another man willing to help for a share of the cave.)

(As they were searching the knob, they discussed caves he had found.) “We talked about the different caves he knew I had dug in and he asked me where I thought our present caves laid. I told him the caves that were so white and pretty they were the ones that no air could get into. In finding, then you had to first find the cave, then you can find the entrance. He asked me how in the devil do you do that? I told him you had to get on the south, east or west side of the large hills. The hill had to be as much as seven hundred or a thousand feet high. In going around the hill I showed him how the ground had to lay. In showing him he said, how can you show me without a cave not being there.”

(Cleon identified a location and figured that there was a large rock blocking the entrance, and they took six sticks of dynamite to clear it. They dug till they found the rock, and blew it up.  Then they had to carefully clear the rubble.) “Some small rocks fell and he and I heard them fall. He looked up at me and said “Hell” for this darn hole is a hundred feet deep if it’s an inch.”  They lost their bar into the hole and very carefully got out of the scary situation.)

(They got cables and ladders and went back.) “What we carried on our backs up there didn’t go half-way to the bottom of the cave I went down. What was swinging in the hole I went in under the ceiling of the cave. I had never seen anything like that before. I saw the most beautiful cave I had ever seen.” (The next morning was June 23, 1960.  They got more ladders and ropes and did exploring of the cave.) “The lantern was lit, I could see the large cave above me large onyx falls, large columns, large draperies, and other formations… It entered my mind, what have I found., can this be what I have been looking for all these years? I stood there looking at some of the limestone formations around me. I had never seen anything like this before. What has happened here this deep under ground?…”

(He and some other helpers continued exploration of the side tunnels with their spectacular formations.) “We talked all the way to the cars about the cave and how much different it is to all the other caves. How much different it it to all other caves is to be seen. We had been in and why we couldn’t understand so many different colors in the formations that were in it that the news got out all over the country and into news papers office people started to looking me up. I was making trips all most every day to the cave.”  (People helped him with timbers to shore up the entrance and he installed a barred, locked gate.)

“During the four years I made hundreds of trips over that hill to the cave. The discovery that brought so many people to me was when I made the discovery of the Indian Burial grounds. That was about six months after I discovered the cave. That brought people from all sections of the country even doctors, school teachers, students and geologists. One doctor was from London, England, and one from India.  He was a full blooded Indian.” (Cleon related a long conversation with the Indian tying the cave formation to earthquakes, a volcano and the Bible. He thought the large bone he discovered was from a giant. It is hard to follow.)

(He also talked about the geology.  He looked at he soil composition, leaves and sand. That determined the type of formations underground.  He identified five “Levels” of caves.) “The clay has to be a red clay with the yellow rock, also cedar timbers will be on the hill. That yellow stone only goes back under the hill until it gets under sandstone. If the hill is high enough to have sandstone, then it plays out… That yellow stone doesn’t lay above the pits, the yellow stone is in the ceiling of three levels of your cave, and lays from 60 to 90 feet apart in first, second, and third level caves…”

(The rest of the booklet is a description of his exploration of the cave. He describes the formations and gives names to some of the rooms.)